By 1888 the remainder of Arthur Knight’s subdivision consisted of a string of land on the south side of St Georges Road, from Fernacre to St John’s Church, including Barkala on its southern boundary. Arthur Knight’s history can be read here. After a short time ownership by Walter Bayston and Thomas Barrett, the Commercial Bank became the next owner of this land.

On 4 August 1900 Henrietta and Henry P Singleton bought lot 8, a 32½ acre parcel of land. The title was in Henrietta’s name. A previous owner, Thomas Barrett, was a builder, and there is a probability that there was a new house on this block. The Singletons named the property Killara. After living in it for a few years it was advertised in the Argus in 1904 as a picturesquely situated property, with magnificent sea and mountain views, a comfortable 5-room house, "with all accessories, good land, good roads". By now Henry Singleton was in his mid-eighties, and even though he was described as having "retained an unusual measure of bodily and mental vigour", the large property may have been too much to manage. Henry Singleton died at Killara on 7 July 1909.

A few months after her husband’s death, Henrietta Singleton sold the property to Dr William Elliot Drake, a physician, who had come to Australia in 1900 for health reasons.

Dr Drake returned to England in 1901 marry Christine Maybelle Harris. Together they permanently migrated to Australia ten days after the wedding in January 1902. For a short time they resided at Black Rock, where their only child was stillborn prematurely. From 1903 the Drakes were mentioned in Upper Beaconsfield, and they rented Rosemont at some time. When they bought lot 8, they also acquired Fernacre (now 55 St Georges Road), and 34 acres of land on the opposite side of the road (CA 38 + 39), now comprising No 42 - 58 St Georges Road, as well as the properties along Harpfield Road.

On 8 January 1910, architects Klingender and Alsop of Melbourne invited tenders for erection of a timber residence for Dr W. E. Drake. (Rodney Alsop had already designed Edrington in Berwick.)

Woonda Mia was a substantial house built of jarrah. It contained 11 rooms and conveniences, had 12 ft verandahs, hot and cold water, and an air gas plant. Disaster nearly struck towards the end of the building works, when beeswax and oil which had been used to treat the inside panelling caught fire. Luckily some workers were able to put out the fire before it did too much damage.

The Drakes were very involved in the Upper Beaconsfield community. Dr Drake was president of the newly-formed Men’s Social Club, as well as being on the board of the Assembly Hall. Christine Drake donated and played the organ at the church. They were a wealthy couple, both having inherited from their respective families in England. Here they bred chickens and Irish terrier dogs, which they imported from overseas. They regularly exhibited at the local and Berwick Horticultural Show, and were prize winners for flowers, apples, butter and eggs. Dr and Mrs Drake collected butterflies; their collection, numbering over 5000 specimens, was donated to the Melbourne Museum. Christine Drake was the founder of the Ladies’ Kennel Club. They regularly travelled to England, and their English friends and family visited them here. During one of their holidays, their caretakers ransacked their house and made off with everything they could fit into the buggy which they also stole along with the horse. It was estimated that the value of the stolen goods was more than £1,000.

On 3 November 1921 Dr Elliott Drake died from tuberculosis, with which he had been afflicted by for twenty years. He was 54 years old. His estate was valued at £17,396.

In early 1922 Christine Drake advertised Woonda Mia for sale at £4,500, but didn’t find a buyer. It was advertised as "occupying the very best picked position, in this salubrious and picturesque district, justly pronounced and proved to be one of the healthiest and most delightful residential districts within easy call of the city. Situated amongst the hills, with the charming, interesting, and varied scenery that Beaconsfield is so noted for."

After William’s death Christine spent about a year in England. On her return she continued her involvement in the village. She was a tireless contributor to the fund to build St John’s Church. In memory of her husband she donated two stain glass windows, depicting the "Golden Hind", flagship of his Elizabethan ancestor Admiral Sir Francis Drake, and commemorating Dr Drake’s expert knowledge of butterflies.

In July 1927 Christine Drake sold Woonda Mia to Major Charles William Campbell, after excising a 2 acre allotment for Miss Olive Elliott, who had been her housekeeper. A cottage called Lynwood was built on this land. Christine had also sold four acres of land along Harpfield Road to their groom Frederick Keeble. Christine bought a property on Manuka Road, Berwick.

Later in life, on a return trip to Australia in December 1940, her boat was torpedoed, and she was one of only fifteen survivors after drifting in a lifeboat for more than 40 hours in the icy waters off Ireland, wearing nothing more than a nightie.

Major Charles William Campbell called the property Amesfield Park, named after his other properties in Malvern and Mornington. The Major enjoyed the exotic garden of the property, as in 1929 he showed a collection of flowering plants, including proteas and warratahs at the Malvern Show. These shrubs were no doubt planted by the Drakes. Unfortunately the 1932 bushfire destroyed the fine garden, and it was estimated that hundreds of pounds of valuable plants and trees were destroyed. Miss Elliott’s house caught fire, but was saved by stripping off part of the roof, and Amesfield Park was only saved by the superhuman effort of the fire fighters. After the fire Major Campbell donated a model "T" Ford, which he had converted to a truck to the Rural Fire Brigade. 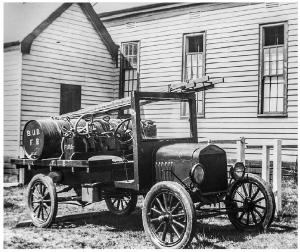 Another bushfire in 1936 only narrowly missed the two houses again. Major Campbell also installed an automatic gate with trip mechanisms, one to open the gate the other to close it. His love for whisky made his driving a bit erratic, so damage to the gates happened more than once.

Amesfield Park was advertised for sale first in March 1935, and again after the Major Campbell had died in 1936. The two holdings (on either side of St Georges Road were finally sold to John Stanley Ogden for £2,200 in June 1937. Ogden was born in the USA and established the Lookwood brand of padlocks.

In October 1942, Charles Edward Henderson, the Ogden’s permanent gardener, was helping John Ogden to round up some horses on the property. When the horse returned without its rider, John Ogden went to investigate and found Henderson dead. One newspaper reported that the saddle girth had snapped, which resulted in his fatal fall from the horse.

Only a few months later, in June 1943, John S Ogden died, aged 45, at a private hospital in Melbourne. A year later in 1944, his widow Olga Ogden sold the property to retired navy surgeon Captain Alexander Scott-MacKenzie and his wife Willa. Only five years later, in 1949, Willa died at Amesfield Park.

Alexander sold lot 8 to Freda Grace Stott, wife of Harold Stott, of Stott’s Business College, but retained the land on the northern side of St Georges Road, where he had probably established a piggery. In 1951 this property was subdivided into four allotments, where the Broomhill and Mungeribar potteries were later built. (52-58 St Georges Road).

The Dandenong Journal of 1 October 1952 writes that Harold Stott complained about deer damaging his garden. Nearly 70 years later, the same curse has returned to Upper Beaconsfield.

After her husband’s death in 1955, Freda Stott subdivided Amesfield. The main part, by now simply known as Amesfield, was reduced to just over 25 acres. The remaining five acres were split in two—43 St Georges Road was sold to Cornelis and Pamela De Vreugt for £3250 in the late 1950s, and the old stables on 41 St Georges Road were converted into a 2-bedroom cottage, which was named Little Amesfield; that Freda Stott retained until her death in 1979.

In January 1959 Amesfield was sold to estate agents Geo M Hume Pty Ltd for £10,500. The council rated the property’s net annual value of £125. It is not known who lived at Amesfield during their ownership.

Then in March 1962 Amesfield changed hands for £15,000. The new owners were dentist Richard ‘Dick’ and his wife Vara Goldman. The net annual value of the property had increased to £318.

Dick was a dentist in Collins Street, Melbourne, and enjoyed the weekend country life. He ran a few cattle on the property. He was described as a charming and gregarious man. Vara Goldman had been matron of Vimy House Hospital. She was a good organiser and fund raiser. One event was held at Amesfield, in aid of the ‘Save the Children’ fund. It is recalled that a marquee was erected on the property for a black tie dinner.

The property was on the market in October 1975, but was passed in at auction, not attaining the $100,000 that was asked for it.

In January 1980 Amesfield was sold to Wilfred and Sue Thornton, who had previously lived in Upper Beaconsfield.

Wilfred had been managing director of APPM (which became AMCOR) for nine years. On his retirement in February 1983 he was given numerous presents. Charles Wilson recalled being invited to dinner at the Thorntons two days before the Ash Wednesday bushfires, where he was shown the presents, only to see Amesfield being destroyed on that dreadful day.

After the fires the land was sold to Bob and Dorothy Grant, who built a new house.