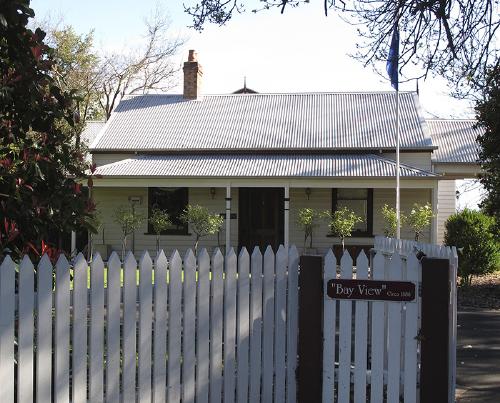 Arthur Knight sold l/p 1265 Lot 4 to Catherine Walsh, a spinster of Kew, on 22 Oct 1886. On 1 Feb 1889 the property was sold to Rev George Frederick Handel South, but it is unclear if a house had been built by that time. The rate books are not conclusive in this matter. The South family lived at Linwood (located where Kimbolton is now), on McBride Road, and Dr Arthur South, who chronicled his upbringing in Upper Beaconsfield does not mention this property. South eventually lost this property to William Edward Morris after some court action by a James Robert Phelan, who sent the sheriff after South to retrieve some money.

L/p 1265 Lot 3 was bought by William Henry Dale on 2 Sep 1895 from the Commercial Bank. Dale used to own a property on Stoney Creek Road (GEM-D-14), which was auctioned the previous year by order of the mortgagee. A carpenter by trade, Dale would have commenced building his new house in St Georges Road immediately. He named his house 'Ferndale' the same name as the Stoney Creek Road property used to have.

It appears that William Henry Dale again found himself in financial trouble in 1898, when he sold his property to his cousin James Dale Atchison, a leather merchant from St Kilda. Atchison allowed Dale to live on the property for the remainder of his life, but as Dale died before Atchison, 'Ferndale' was sold to Dr William Alexander Teao Lind, who already owned Lot 4. Dr Lind died in 1928, at at that time the house was described as a 5-roomed weatherboard house, which was valued at £480 in his inventory, but at £600 in his unrealised assets. Dr Lind directed that this property should be given to his son, even though he was still a minor. The Lind retained this property now called 'The Wattles' until 19 Aug 1946, when it was sold to Bernard Louis Hickie.

Sidney James Bowman and his wife Dorothy Ellen bought Hickie's property, which still contained 10 acres and was rated at £35 net annual value, in August 1949 for £2,000. As Sidney Bowman hailed from Downham in Norfolk, he chose to rename the house on lot 3 'Downham'. In 1950 the Bowmans started to sell parts of lot 4, which was probably vacant land:
To Trevor Basil Kilvington, who already owned Applecross, two small blocks of land which would later become 11 + 13 St Georges Road.
To John William Belfield and Lilian Margaret Belfield an acre in 1956, now 9 St Georges Road, and the balance of lot 4 - now 7A St Georges Road to Ernest Perrins and Nancy Louise Perrins on 19 January 1961 for £2,800. This purchase would have included all of lot 3, including the house 'Downham'.

'Downham' retained its name through the Willmott's ownership until about 1976 when Brian and Laurice Dickinson renamed it 'Bay View', its current name, which is now 7 St Georges Road. A small block on lot 3 was sold to George Thomson in 1962 - it is now 5 St Georges Road.