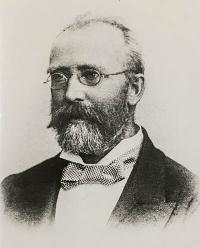 William Henry Goff was born to a protestant family in County Roscommon in Ireland in 1842. Little evidence can be found about his upbringing.

It was known that a Mr Goff – likely his father – was assistant schoolmaster at the workhouse in Roscommon. Local newspapers in their regular reports about the workhouse eagerly reported floggings of pupils and other inmates, William Goff's family was likely related to a wealthy Rev Thomas Goff, who among other properties owned an estate called 'Carrowroe Park' near Roscommon.

It is not known when William's father died, but his mother, Ellen Goff, remarried when William was 13 years old. Her new husband, William Daniels, was a lance corporal in the 41st Regiment. At the time Ellen was described as a schoolmistress. It is likely that William was educated in a school of the 'Incorporated Society for promoting English Protestant Schools in Ireland'.

Under the patronage of the Incorporated Society these schools selected a limited number of boys aged between twelve and sixteen from scriptural schools by examination. The successful boys then had the privilege of being educated in English and sciences for four years at no cost to their families. After the four years, those boys who passed a creditable examination won the right to go to the Incorporated Society's Training, Scientific and Commercial Institution at Santry near Dublin, which offered three years of more advanced education. By merit, William Goff received some form of scholarship that enabled him to earn the grade of 'mathematical scholar' at Santry.

Goff must have been a very able scholar, as in December 1862, aged only twenty, he was teaching at the Dublin English Scientific, and Commercial Day School, which the Incorporated Society had established in 1856 at their headquarters. This school was to give boys instruction in the highest branches of an English, scientific and commerical education, including grammar, geography, history, arithmetic, book-keeping, mapping and surveying, mathematics, natural philosophy and modern languages. Pupils were also reading the holy scriptures daily. In 1866 Goff started attending evening classes in chemistry at the Museum of Irish Industry (Royal College of Science), where he won a first prize at the final examinations. Only two weeks later, aged 24, William was appointed headmaster.

Helen Rosa Clayton, also known as Ellen, was born in Winchester, England, on 21 November 1845. She was the daughter of James Clayton, a soldier. Her mother, Mary Ann Rose, was born on a farm called Harpfields, near Burford in Shropshire. James Clayton retired from the army in 1859 to move to Dublin, where he established himself as a merchant.

On 30 Dec 1867 William Goff and Helen Rosa Clayton married at St Philip's, Milltown in Dublin. William and Helen's first daughter, Harriett was born in November 1868, and their son Maurice in August 1870 – who died two weeks after his birth. 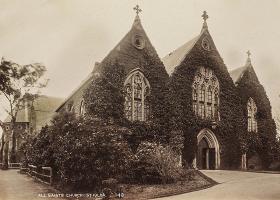 On 14 October 1870 William, Helen and Harriett Goff boarded the True Briton in Gravesend on the Thames to sail to Australia. Their quarters would have been reasonably comfortable, being saloon (first class). Their journey was long, but enjoyable, and when they disembarked on 19 January 1871, they together with their fellow saloon passengers sent a letter of thanks to the captain of the ship.

It has not been established what made the Goff family to come to Australia, however, around the time of their departure All Saints' Church in St Kilda started to hold lectures in aid of a building fund for a church school "for the boys of the parish and neighbourhood [with] the advantages of a commercial, mathematical, and elementary classical education, combined with the religious teaching of the church."

On 22 Apr 1871 applications for the position of master were called for. Goff was an ideal candidate, as his experience as a teacher in a similar school in Dublin showed. He was appointed and the school commenced on 1 June 1871. From reports published in the newspapers it was a success and by the end of the first year there were 48 pupils enrolled, at the end of the second year the number had doubled. Goff stayed on as headmaster of All Saints' Grammar until the end of 1902 – nearly 32 years. He had taught 1420 boys, among them were a large number of men later occupying prominent positions either as barristers, solicitors, doctors, engineers, or surveyors. Goff was not averse to punish his pupils with the cane if he felt it necessary. A student in the 1890s recalled that Goff would send the boy to receive the caning to the nearby asylum for the blind to collect a good strong cane from their workshop. His familiar greeting was "I wonder what this boy wants?" He had a ritual involving swishing a cane through the air for practice. Looking the other way while caning a boy, his accuracy was not much of a priority for Goff. Once he missed and smashed a window. At least, here the local newspapers had no interest in reporting such cruel treatments to children.

The early success of the school did not last through the major 1890s recession. Other schools in competition with All Saints' Grammar suffered a similar fate.

The Goffs had six more children after their arrival in Australia – William Henry junior, Florence, Herbert Clayton and Charles Edward. Lillie and Walter died in infancy.

In December 1875 William Henry Goff bought land at the corner of Dandenong Road and Williams Road, Prahran - not far from All Saints' Grammar. A 12-room, two-storey brick house was built c1878, named 'Carrowroe', most likely named after 'Carrowroe Park'. The Goffs also offered lodgings at their house for pupils at the school who lived further away. 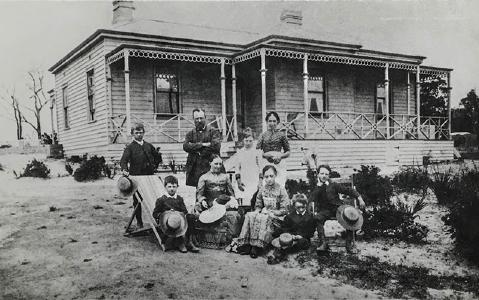 The Goff Family at Harpfields 1880s

Speaking of places far afield, on 5 July 1877 Goff applied for a 18-acre selection in the Parish of Gembrook, being allotment 42 of section D, situated along St Georges Road. The father of one of his students, John Vale, was a real estate agent and neighbour, and probably headed Goff in our direction, not to mention Upper Beaconsfield having a reputation as an accessible place to build a weekender. In 1878 Goff and Albion Walkley, the selector of the neighbouring property, agreed that the frontage of Goff's property should be widened. In exchange Goff would give up the same width of land at the back of the property.

Most of the 20-acre allotments in Upper Beaconsfield were selected in 1877. After selection the land had to be improved. It had to be fenced and partially cleared, before a crown grant could be obtained. The selection was then put up for public auction, where the original selector had first option to buy the land at £1 per acre in most instances. There were always people on the lookout for blocks of land where the selector had not fulfilled the conditions the government had set. William Brisbane was someone who knew the local area intimately, and he wrote letters to the Lands Department alerting them to such selections, requesting that they should be forfeited and made available to other selectors. For Brisbane, a land agent and sawmiller, it was an opportunity to make money from a new selector. Given that a selector could only obtain one property under the land act concerned, they would often apply for such nearby properties in the names of relatives or friends. Along St Georges Road there were a few selectors who hadn't complied with the conditions of selections: Curiously allotment 38 was selected by George Buller, a teacher working at All Saints' Grammar School, and allotment 39 by Goff's brother-in-law George Clayton. The crown grants of the two lots were obtained by William Goff at the public auction. In 1883 he also bought Walkley's property, allotment 40. Eventually he owned 73 acres. By 1882 Goff had built a house on allotment 42. They named it Harpfields, after the birthplace of Ellen Goff's mother. A tennis court was built on allotment 43.

In 1879 allotments 35, 36 and 37 were snapped up by John Vale and his family. Over the years the Goffs would have further dealings with the Vale family. Curiously the Vales' three lots were owned by Goff by 1892, and returned to Mary Vale in 1905.

Although Goff had considerable landholdings in Upper Beaconsfield and a large house in Prahran, he was not one of the very wealthy residents. The title certificates to his properties show that he regularly obtained mortgages on his properties, some of which appear to have been foreclosed. In 1902 he was sued for £183 by a firm of butchers at Windsor. As a result, caveats were put on some of the titles of his properties until the debt was paid off. 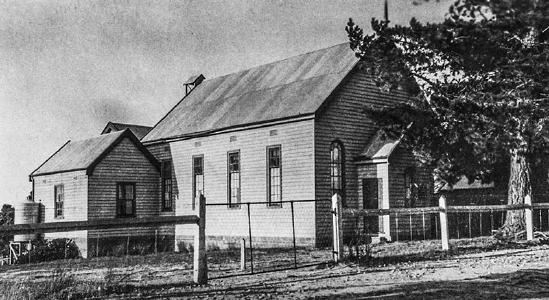 With the family spending more time in Upper Beaconsfield, William Henry Goff with other residents saw the need for a public hall. In 1883 Goff was appointed one of the trustees of a 1-acre lot that had been gifted to the local people for the purpose of a hall by Thomas Jacques Martin. Goff, the honorary secretary to the trustees, was enthusiastic in raising the funds for the building of the hall that we still treasure today. In 1888 it was reported that the building and furnishing had cost £1150, with most of the funds raised by subscription from the local residents and by fundraisers. At the time there was a residual debt of £190 that they hoped to clear shortly.

With his mark stamped on the community, Goff soon was ambitious to be elected as a councillor of the Shire of Berwick. In 1886 the residents of Upper Beaconsfield and those further north to Gembrook were eager to form a fourth riding of the shire. They felt that they had to pay rates which were largely of benefit to the people of Berwick. Their own riding would see their rates spent for their own needs. Six candidates contested the election in August 1886, and the three local contenders were elected – William Brisbane, William Henry Goff and Jessey Sykes.

Goff was a popular councillor, and in 1892 he achieved a road being opened to connect St Georges Road to Narre Warren Road (now Foott Road), then known as Lawes' Road. On his retirement from council in 1897 he was remembered as being "universally respected and liked, and [that] his good-humoured jollity many times served as a pleasant break to the often dull monotony of the council meetings." He had served as shire president for two terms, 1890/91 and 1895/96.

After his retirement from All Saints' Grammar the Goff family moved to Upper Beaconsfield permanently. For a short time he ran a private school at his property called Beaconsfield Grammar School. Ill-health prevented him to continue his private venture. On 28 May 1906, William Henry Goff died at Harpfields, aged 61. Three sons and a daughter survived him. His widow Ellen Goff remained at Harpfields until her death in 1928. Only their son, William Henry Goff, survived her. He inherited the Upper Beaconsfield property, and passed it down to his two unmarried daughters, Helen and Doris, who regularly spent time here. In 1980 Doris Goff wrote in the Village Bell that Harpfields was the oldest house in the district in its original state – no alterations had been done to it. Sadly, Harpfields was lost in the Ash Wednesday Fires. A new Harpfields was built a short time later.

In 1964, a name was sought for the road that is now known as Harpfield Road. It was first suggested to name it Goff Road, but as there was already a Goff Street in Beaconsfield, Harpfield Road was chosen instead.