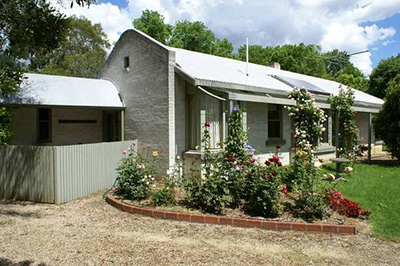 Elizabeth McLean bought lots 5 and 6 of l/p 1265 from the Commercial Bank on 18 Nov 1897. With her husband Duncan McLean they lived in a property called "Applecross" until January 1913 when they sold it to William John Clezy Brown. From the rate books it can be assumed that the Browns, a wealthy couple, built a new house with the same name - the net annual value increased from £8 to £75 in the year they bought it. The Clezy Browns, as they were known, had bought 5 acres (part of lot 7) from Dr William Elliot Drake in November 1912, making the Applecross property 15 acres.

William John Clezy Brown had played with the East Melbourne Cricket Club in the 1880s. After his marriage to Alice Emily Brunton, daughter of Thomas Brunton, a leading flour miller in Melbourne, W J C Brown was admitted into the partnership  of "T Brunton & Co". The Clezy Browns travelled widely, and on one of their trips to Japan were in Yokohama when an earthquake struck. They were unhurt, but lost all their possessions. W J C Brown died while they were staying in England in 1929. Alice returned to Upper Beaconsfield to sort out her estate, and advertised Applecoss for sale at an early date in the Argus on 20 May 1933.

For her antiques a catalogue was produced which is available at the National Gallery of Victoria. Alice Emily Brown returned to England where she died in 1947.

The rate book lists Samuel William Tetley as the owner of Applecross from 5 July 1934 (transfer on title 12 Aug 1937), and the Tetleys lived in Upper Beaconsfield until January 1945, when they sold the property to Gordon Nugent Ayrey for £2556. Samuel Tetley owned the packing shed for a short time in order to store his furniture and effects. Mrs Ayrey's parents, Bernard Louis and Annie Pauline Hickie, lived in the house next door (lot 3 + 4) at the same time.

In August 1949 Trevor Basil Kilvington bought Applecross for £4737. He retained the property until May 1962 when he sold it to Victor Leslie Fankhauser. Unfortunately, Victor Fankhauser was only able to live at Applecross for two weeks, when he contracted pneumonia and died. Just at this time John Mitchell Bellair and his wife Joan Bellair were looking for a property, and George Thomson, the local estate agent, showed them Stapledon's property "Netherby" further down St Georges Road. "Netherby" didn't suit them, so they pointed at "Applecross", saying to George Thomson that something like this would be more to their taste. So George told them about Victor Fankhauser's death, and ultimately the Bellairs bought "Applecross" at the same price as Fankhauser had paid (£10500).

John Bellair has written up the story of Applecross, and its ultimate loss in the Ash Wednesday fires. The Bellairs retained lot 5 where the house had stood, and built a new house, also named Applecross. Peg Bellair, John's second wife, lived at Applecross until her death in 2007.